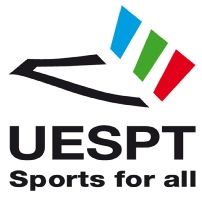 The road up today of European Sport for All Federation

The present Statute of UESpT (composed by 24 articles) adopted considering the UESpT statute drawn up in Strasbourg on 24/2/1984 and considering the statutory conclusions reached at the Extraordinary General Assembly in Milan on December 5, 2014.

The new Board of Directors was elected in Milan on December 5, 2014